In some environments the Cristie Virtual Appliance will be behind a firewall without connectivity to the internet for updates or upgrades. Without this connection the need arises to temporarily connect the Cristie VA to the internet, sometimes this is not available.

Taking advantage of new features and improvements by updating is an important part of the evolution of the Cristie VA.

We recommend you use the latest updates when available and have developed a process whereby the Cristie VA can be upgraded through the use of a ‘donor’ system that stores the update tars.

Download the update.tar to a CentOS machine (the donor machine) that isn’t the VA.

Copy the script called ‘create_repo.sh’ to the donor machine from the download site.

Open the console on to the VA and run the commands shown to update.

A CentOS donor machine used to hold the update, this machine requires connectivity to the internet to download Cristie VA updates. It should have space for the update.tar file which can be very large - e.g. 12GB, plus any future updates.

The VA must have network connectivity to the donor machine.

A user account on the donor machine with root privileges.

Cristie VA services require restarting after updating the VA. Please make sure no jobs are running before restarting the services, these include: backups/recoveries/simulations/replications etc.

During the process, yum update will install httpd/Apache and some other utilities on the donor machine so the VA can connect and upgrade from the donor.

Copy the ‘update.tar’ file to a location on a donor machine.

Copy the create_repo.sh script to the donor machine.

(You may need to ‘chmod’ the script to run it.)

This sets up the local repo and installs httpd/Apache along with opening ports through the firewall (if enabled).

Move to the location where the script is held, and run the script ‘create_repo.sh’. Follow the instructions on screen. 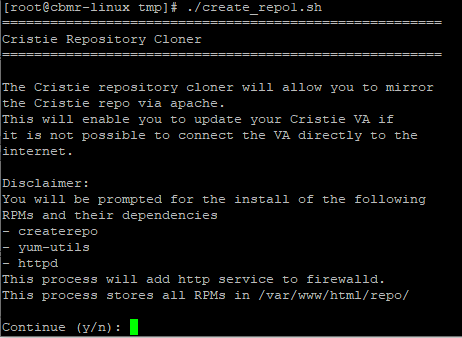 When finished you will be asked to enter path to the ‘update.tar’ you copied earlier.

Confirmation text appears when finished. This shows you the commands you should run on the VA. Take note of the IP Address of the donor machine.

You now setup the VA and add the repo held on the donor machine.

Open a console or a Putty terminal to the VA.

Add the repo using the IP Address of the donor machine, e.g.

Then run the update.

Restart the services on the VA

Once finished you can confirm by running the below command which will show you the new version number and status of services. 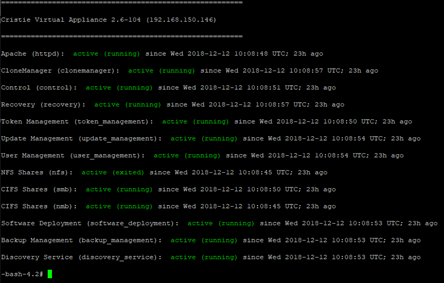